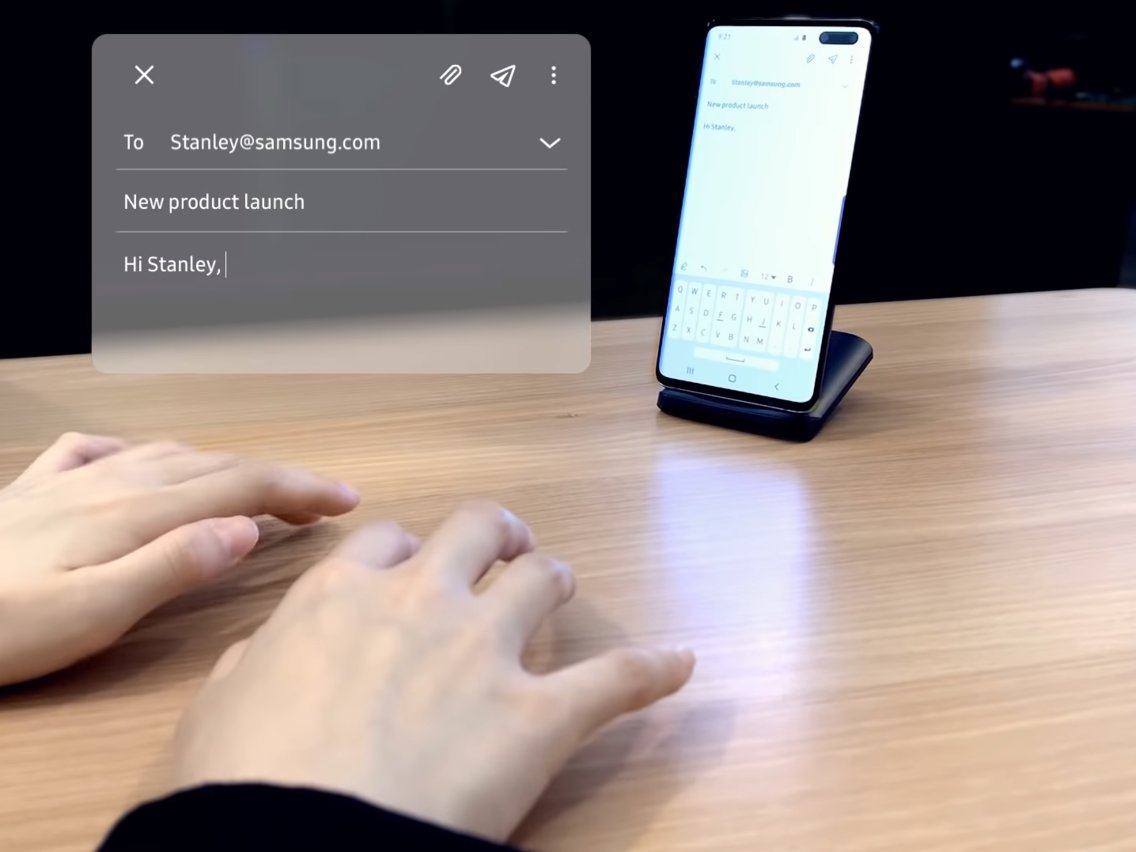 Samsung’s Galaxy Note 10 or Galaxy S11 are amazing in their own right but they still lack the productivity aspect that laptops have. The reason being the phone keyboards are smaller and compact. Now, Samsung is on its way to change that. Samsung will make use of the phone’s front camera to create an invisible keyboard for you. But don’t get too excited! SelfieType is still a research project.

Samsung, through its C-Lab initiative, provides its employees a chance to work for a year on a research project that can end up as products. SelfieType will combine AI with your phone’s front camera to trace your finger joints and translate the movements into keystrokes.

This is not the first time virtual keyboards have come up in the market. It’s just that they never really became a hit among the users as they were considered unreliable. However, SelfieType is a little different here because it works by analyzing how your finger joints move and not by taking into consideration where you physically press down with your finger. If you look at it from a non-technical perspective, SelfieType is trying to do what the older projector keyboards did. SelfieType doesn’t project any images but it will create a virtual full QWERTY keyboard on a hard surface like a desk. The front camera will then determine what you are typing in real-time. Although it is not market-ready yet, the foundation has been laid.

One of the C-Lab researchers in the SelfieType project, Won Chun, said the main challenge with the project is to get data. The algorithm that understands the joint movements will be more effective if the researchers could collect substantial data about different typing styles and hand sizes.

Although we want to remind you that these gestures look amazing in demo videos, but their practical implementation is actually questionable. The only reason being every hand is different and moves in a different way. So, the AI in SelfieType needs to a lot more advanced. The other option is that Samsung can design a portable surface that is good for typing. This portable surface will mean that you are just working with a normal Bluetooth keyboard.

An impressive fact about SelfieType is that it doesn’t need any hardware which is unlike the projector keyboards that we talked about previously. There is a possibility that once SelfieType is perfected, it may be available on smartphones through just a software update. Of course, the available will be limited to only certain high-end models that are powerful enough to handle AI-based image recognition on the go.

Technically, Samsung’s SelfieType is different from other projector keyboards. But when it comes to the audience’s perception of it we are still not sure. Only time can tell whether it will end up like other projector keyboards or not. There are obviously reasons to remain unsure of the success of this virtual keyboard. The previous attempts to create a virtual keyboard have not exactly been successful. However, the positive thing to keep in mind is that smartphone cameras, AI and image recognition technologies have progressed a lot in the last few years. So, who knows virtual keyboards might actually be a reality.

There is a possibility that SelfieType might work as amazingly as shown in the teaser video. If that happens then SelfieType can prove to be a brilliant solution for users who find it uncomfortable to type on the smartphone/tablet’s screen. More so because SelfieType doesn’t require any additional investment.

Mind you we are not trying to say that the combination of SelfieType and smartphones or tablets will be a deadly combination that will put all laptops out of use. But it will definitely be a welcome move if SelfieType manages to improve the typing experience even by a little bit. Especially, because that will be achieved only through a software update.

That’s A Wrap on Samsung’s SelfieType!

The SelfieType seems like another breakthrough technology just like all the others at CES 2020. But we can’t ignore the fact that it is still a research project. The SelfieType has a long way to go in terms of a successful practical implementation. The research time will have to discover ways to make this technology work successfully under all circumstances.